If you are looking for cultural pastimes on your next visit to Ardanaiseig, Edinburgh is just a couple of hour’s drive. Not to be missed on your visit is an unmissable exhibition on renowned World War I artist John Bellany, which is running at the Scottish Parliament building.

Alongside these pieces of art will be a specially commissioned poem by Scotland’s Makar, Liz Lochhead, which is her creative response to the works. 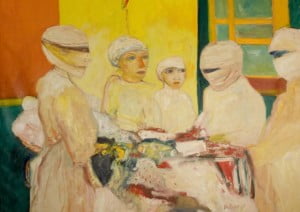 One of the John Bellany paintings on display at the Scottish Parliament. Copyright of https://www.scotsman.com/

The hospitals were staffed almost entirely by female doctors, surgeons, nurses and support staff and were funded by communities from across the UK and beyond and John Bellany’s widow says it was his “admiration and thanksgiving” for the nursing profession which helped inspire him to create a body of work dedicated to the female nurses and doctors who treated soldiers on the frontline.

Read more about the exhibition on the Scottish Parliament website.
https://www.scottish.parliament.uk/visitandlearn/95459.aspx