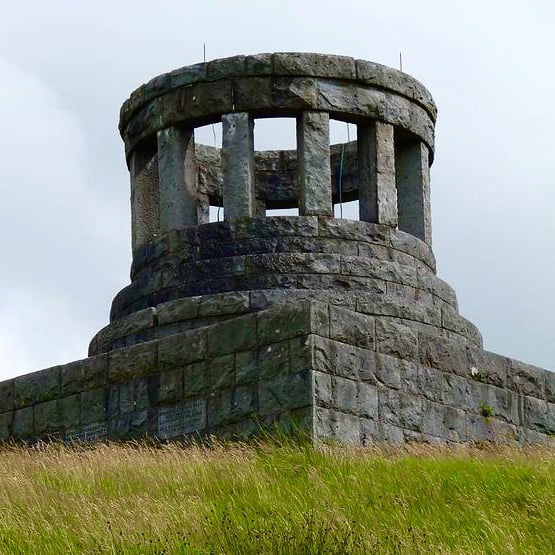 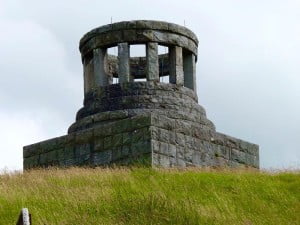 Donnchadh Bàn Mac an t-Saoir, known in English as Duncan Ban MacIntyre, was a Scottish Gaelic poet born in 1724 in Glen Orchy, Argyll. MacIntyre held a great appreciation for the natural world, especially the dramatic scenery of his native Argyll, and he became known for his nature-themed poetry. Though he was illiterate, he committed his creations to memory and his work was part of Gaelic poetry’s 18th century golden age.

Looking out over the rippling Loch Awe from Ardanaiseig’s drawing room and bar, you can make out a small building standing proud on a low hill to the left of Munro Ben Lui. This relic of a time long past is a monument to the Scottish bard and a reminder of this landscape’s rich cultural history. 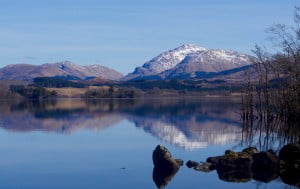 The granite structure was designed by John Thomas Rochead, the Scottish architect behind the Wallace monument. Rising up 44 feet tall, the “Duncan Ban Monument” was built in 1859 by way of a public subscription and sits surveying Loch Awe from a beautiful vantage point.

One of MacIntyre’s best-known works was written after he fought at the battle of Falkirk as a substitute for Fletcher of Crannach Farm. During the battle, MacIntyre lost Fletcher’s sword, which prompted the latter to renege on their deal of monetary compensation.

As many writers and artists in general will know, strong feelings, be they positive or negative, often yield great work. MacIntyre wrote “Song of the Battle of Falkirk” about the battle, including verses referring to Fletcher and his sword. Read the poem here.

MacIntyre’s collection of nature poetry includes “Moladh Beinn Dòbhrain,” which translates to “In Praise of Ben Doran.” This mountain, also a Munro, is located in Argyll’s Bridge of Orchy Hills, about an hour’s drive from Ardanaiseig via the A85. The poem describes the “luxuriant mountain, sprouting and knolled” as “more healthy and cloudless, than all hills in the world.” Read more here.

This nod to a talented poet is just one of the many things that makes up the view from Ardanaiseig. If you’re heading in our direction soon, don’t forget to bring binoculars!